“And just like that, everything changed. At that terrible moment, in our hearts, we knew. Home was a pen. Humanity, cattle.”

1.You are the prey and we are the hunters.

The World of Attack on Titan and the Despondency of Mankind

The world has been overrun by giants called ‘Titans’ and humanity is forced to live behind huge walled cities to survive. Humans lived a peaceful life until one day, a colossal Titan appears and destroys the city gate. Titans once again wreck havoc among the populace and the anime opens with humanity once again thrust back into a life and death struggle.

Stories set in war always calls into question the suffering and existentiality of life. Here is a world which has limitless potential and yet Titans rule it, rendering humanity impotent and helpless.

In this world, the majority of mankind has turned its back on exploration, preferring the safety of the wall than coming face to face with a Titan. Most would rather dash their hopes and dreams than fight for their survival. There are also religious types who worship the wall and construct elaborate mythology to the predicament of mankind.

Against this backdrop the anime casts its heroes, men and women who would dare risk their lives because they dare to dream, found their reason to fight. These are the Survey Corps 調査兵団

Eren Jaeger and the Action of Instinct 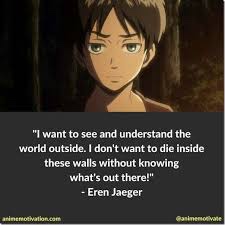 Eren Jaeger the protagonist, hates Titans with a passion because he lost his mother to one. Where others get traumatized and gave up the fight, his passion gets him into the fray.

Mikasa Ackerman and the Action of Devotion

The anime makes it clear that Mikasa lost her parents at a young age to human traffickers. Her astute observation of the cruelty of humans drive her to protect and devote herself to her friends, especially Eren Jaeger. Her action is one of devotion and there is no hesitation to act.

Armin Arlelt and the Action of Intellect

Physically the weakest in the Survey Corps, Armin nonetheless doesn’t shy away from battle. Especially after his intellectual realization that there is no other way to win the war than to give it all. Action comes from realization and discernment of big picture goals.

Levi Ackerman and the Action of Renunciation

World weary and top soldier Levi Ackerman seems to have a laid back attitude. But belies the surface is a flurry of intelligence and complete alertness in life and death situations. He does not live by any rules except that life is inherently unpredictable. The results of our actions may be renounced, but the action itself must still be taken.

Commander Erwin Smith and the Union in Action

Perhaps more than any other soldier, Commander Erwin is a political-savvy soldier who can unite the Needs of the Survey Corps with the general populace. Mankind has an inherent nature to explore and win over obstacles. Fear and trauma has always been man’s greatest enemy. Titans are just a manifestation of what is out of grasp and the dissatisfactory of limiting possibilities. What is out there is the lesser enemy to our inner demons and fear of the unknown. 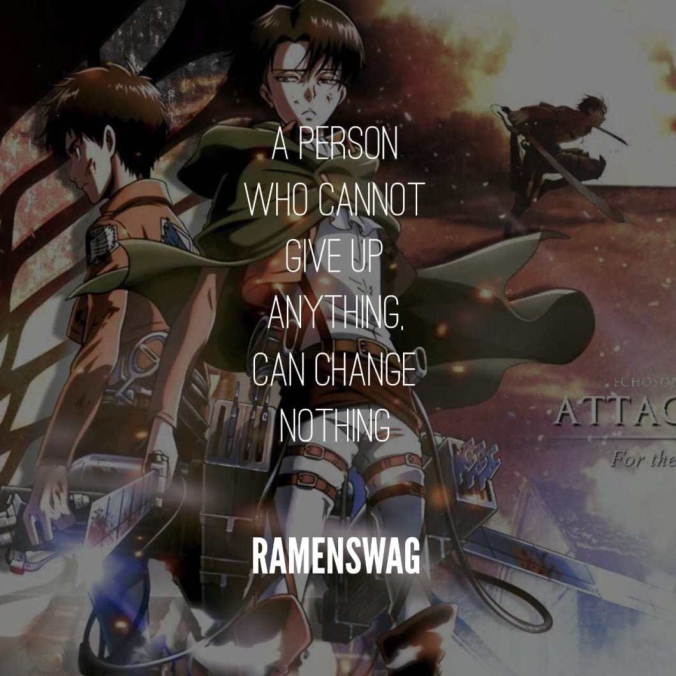